My Perfect Storm of Stress 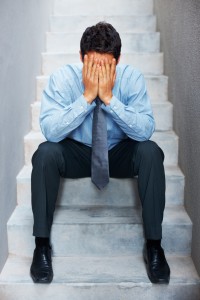 My Perfect Storm of Stress

Thirty years ago, two events in my life collided to create a perfect storm of stress. I lost my job and nine days later I was diagnosed with a brain tumor that the doctors warned could leave me seriously disabled and unable ever to work again.

I was married with four children and a variable mortgage rate that had gone through the roof, so needless to say, my future looked ominous. I had to wait six weeks for the surgery, and the first two weeks was filled ruminations of a dark, impoverished future. Every night I would wake up at two or three in the morning and stare out the window into the cold dark night, terrified by what I imagined would happen.

Then one night I reached a point where I questioned which was worse: the dire problems that might happen to me in the future, or the abject fear that was happening in me every day.

The answer was clear; fear was worse. So, for the next half hour I made an effort to let go of my fear using a simple process I’d learned from a psychologist. It involved becoming aware of every fearful thought and perception my mind made and then shifting to what I experienced when I refused to believe that fearful thought. Relief is what I immediately experienced each time I was able to make the shift. The more I practiced the more the feeling of relief opened to a quieting experience of calm. During one of these moments of quiet I actually felt a glimmer of optimism. By the end of a half hour, my mental state had shifted to an expansive feeling of peace. This time when I looked out the window I didn’t see the cold, dark night of oblivion. What I saw was the stillness of moonlight shining on the trees that made the night feel sacred.

I made the decision, right then and there, to work at letting go of fear and stress whenever it raised its ugly head and to strengthen my willingness to be at peace as I faced whatever I had to face that day. I discovered that choosing to be at peace wasn’t hard. Stress was hard. Peace actually made everything easier, and it allowed me to visualize the outcomes I wanted instead of the ones fear predicted. During the remainder of time before surgery, as I recall, I didn’t entertain one fearful thought. I certainly had fearful thoughts but I didn’t listen to them. My motto became: If fear is talking, for the love of God, stop listening.

My change of mindset changed the outcomes. The surgery was a complete success, sparing me a life of disability. And I found a better job, one more aligned with my heart. It is clear to me that none of this would have happened if I hadn’t shifted from my attitude from stress and fear to peace. If neuroscientists back then knew what they know today, they would have told me that my shift in attitude over those four weeks had literally rewired my brain to quiet stress reactions, which in turn, established the mind-body connection that gave me the best chance for a positive medical outcome.

Success at every level of life is all about the brain and the state of your brain is all about your state of mind. Science has discovered that peace is state of the mind that generates optimal brain function. It’s called the neuroscience of success, which is the basis of my book The End of Stress.