Don Joseph Goewey is the managing partner of ProAttitude, a human 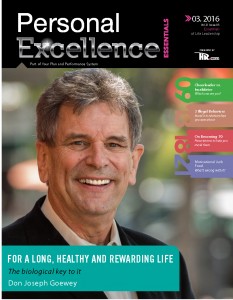 Don has worked with some of the most stressful situations on earth – with people facing terminal illness, parents struggling with the loss of a child, prisoners adjusting to a life sentence, and refugees of the genocidal war in Bosnia struggling with extreme post-traumatic stress. Don spent six years directing a think tank aimed at integrating breakthroughs in neuroscience and psychology.

From this work, he innovated a model for changing brain structure to extinguish stress reactions and amplify the higher brain function that enables a human being to flourish. The success of the model in helping people end stress in high pressure workplaces like Cisco Systems and Wells Fargo has been unprecedented. He is the author of The End of Stress, Four Steps to Rewiring Your Brain, Mystic Cool: Neuroplasticity, Thought, and the Power of Attitude. He has appeared on the Dr. Oz Show, Today Show, CNN and NPR. He also writes for the Huffington Post and